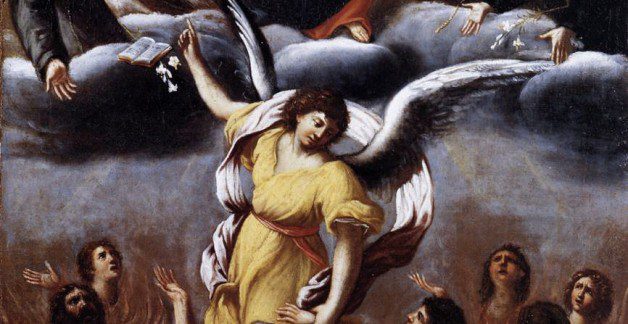 Br. Raymund Snyder, the author of this reflection, entered the Order of Preachers in 2010. He is a graduate of the University of Notre Dame, where he studied philosophy and classics.

In the month of November, the Church calls to mind and prays for the faithful departed. When I was growing up I thought this was silly. Why should I waste my time praying for the dead while the living are in such need of prayer? Needless to say, I eventually changed my tune. The living are no doubt in need of prayer, but from the beginning the Church has honored the memory of the dead and offered prayers on their behalf so that they might be purified and come to see God face to face. This includes commending the dead to God’s mercy in the sacrifice of the Mass, as well as almsgiving, indulgences, and works of penance undertaken on behalf of the dead.

Praying for the dead is not just an obligation for All Souls’ Day or for the month of November. Rather, prayer for the dead is a perennial act of mercy that flows from a compassionate heart. The holy souls in purgatory elicit our compassion in a special way. For starters, they are all too easily forgotten. We do not see them. Nor do they come to us asking for prayers except by some extraordinary grace, as in the case of St. Catherine of Genoa.

The holy souls in purgatory are unable to help themselves. They cannot pray for themselves or undertake works of charity, but are instead entirely passive to God’s purifying action. As St. Thomas puts it, “They are not in a condition to pray, but rather in a condition that requires us to pray for them” (ST II-II, 83, 12). This is why they are traditionally called not just the “holy” souls, but also the “poor” souls. It’s hard not to have compassion on someone who has been forgotten and is in need of help, yet is incapable of asking.

In addition to All Souls’ Day, the Dominican Order prays in a particular way for all deceased members of the Order of Preachers on November 8th. On that day, the Dominican Order commemorates all the deceased brothers and sisters of the Order. November 8th, which falls six days after All Souls’ Day, is affectionately referred to as “All Dominican Souls.” As Dominicans, we have a great devotion to the holy souls in purgatory. Every one of our priories must offer a Mass for the dead each week, and every friar must offer a Rosary each week for the dead. In addition, we also have days set aside for the commemoration of the deceased parents and benefactors of the Order.

The most conspicuous and frequent reminder of the dead that we have, however, is the daily custom of praying together Psalm 130 (the De Profundis) for all of our deceased brothers and benefactors. In the houses and priories of our province on any given day, the praying of this psalm is accompanied by the reading of the names of all of the American Dominicans whose anniversary of death falls on the following day.

Within the context of the Order, it becomes clear that praying for the souls in purgatory is not only an act of mercy, but also an act of mercy toward our brothers, an act of fraternal charity. When entering the novitiate and again when making profession, we are asked, “What do you seek?” to which we respond, “God’s mercy and yours.” The prayers and suffrages from which we hope to benefit after death may be seen as a continued response to this initial request for mercy. From this perspective, it’s wonderful to reflect on the fact that we continue to receive mercy from our brothers even after death. It is good to be a dead Dominican.

Dominican devotion to the holy souls is significant not only for its recipients (that is, deceased Dominicans and benefactors), but also for all the faithful. If the holy souls considered in the abstract call for mercy, all the more so do those who are connected to us in some way. We pray for the dead not only in the generic sense, but also for “our beloved dead.” While in the Order this is an act of fraternal charity, within families prayer for the dead can be understood as an act of piety, that is, an act of devotion to those to whom we are particularly indebted. This familial piety might take the form of a simple daily prayer or sacrifice for those parents, grandparents, and ancestors who have given us more than we could ever repay.

This article was originally featured on Dominicana blog, the blog of the student brothers of the Dominican Province of St. Joseph.