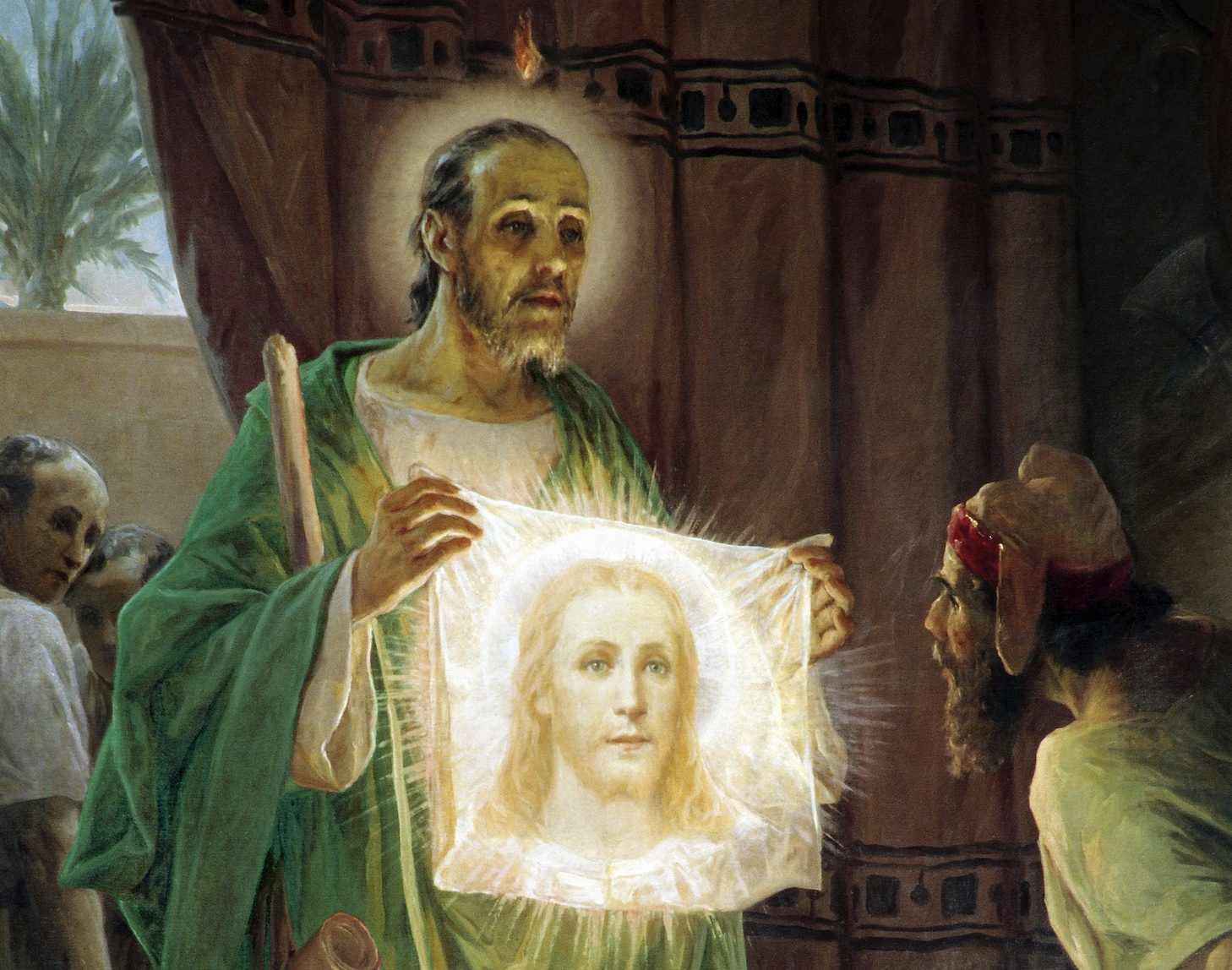 Dominican Priest Shares Testimony of Healing Through the Invocation of the Holy Face
By Fr. Jean-Christophe de Nadaï, O.P.
This article originally appeared in Aleteia and is reprinted with permission.

On April 4, 2018, the Tuesday before Palm Sunday, during the last days of Lent, I woke up with the right side of my face paralyzed.

My mouth was particularly affected; I was drooling out that side of my mouth, such that I couldn’t celebrate Mass without irreverence towards the Precious Blood of the Lord. My eyelid was also affected, so I had to moisten my right eye regularly to keep it from drying out, and keep it carefully closed during the night with the help of a piece of adhesive tape.

The doctor at the Salpêtrière Hospital, whom I consulted the same day, told me that it was a particularly severe form of paralysis of viral origin. The next stage of the illness would apparently be a state of immense fatigue.

We’d try to reduce the inflammation by administering corticosteroid, he told me, but there was no certainty that the facial nerve would return to normal in its entirety. He wasn’t sure that the symptoms would disappear.

On Tuesday, May 2, a faithful lay woman who usually attends Mass at the Convent Saint- Jacques in Paris was moved with compassion at my condition. She came to bring me a vial of the oil of the Holy Face from the shrine in Tours.

She’s a former nurse, and a Christian. Her fervor for Our Lord is the result of her memories of her own past spiritual deviations, from which He had delivered her through a sudden conversion.

Of course, I was aware that my Dominican brothers in Tours had been appointed by the Archbishop of that city to be the guardians of the oratory of the Holy Face, all the more so because the prior of the Convent of Tours was my colleague in my academic mission.

Yet on my own I hadn’t thought to invoke the graces that the Lord could offer me through devotion to the Holy Face, to which my particular form of illness could lead me to have recourse.

Thus, the way I got help was surprising, for it was in a completely unforeseeable way that the woman of whom I speak learned about the devotion to the Holy Face in the city of Tours. Here’s how it happened.

She usually attends the Mass that’s celebrated every Thursday for the intention of the sick in the Church of San-Nicolas-des-Champs in Paris. She went there on April 27 and was impressed to see the way a sick person prayed, which led her to approach her. 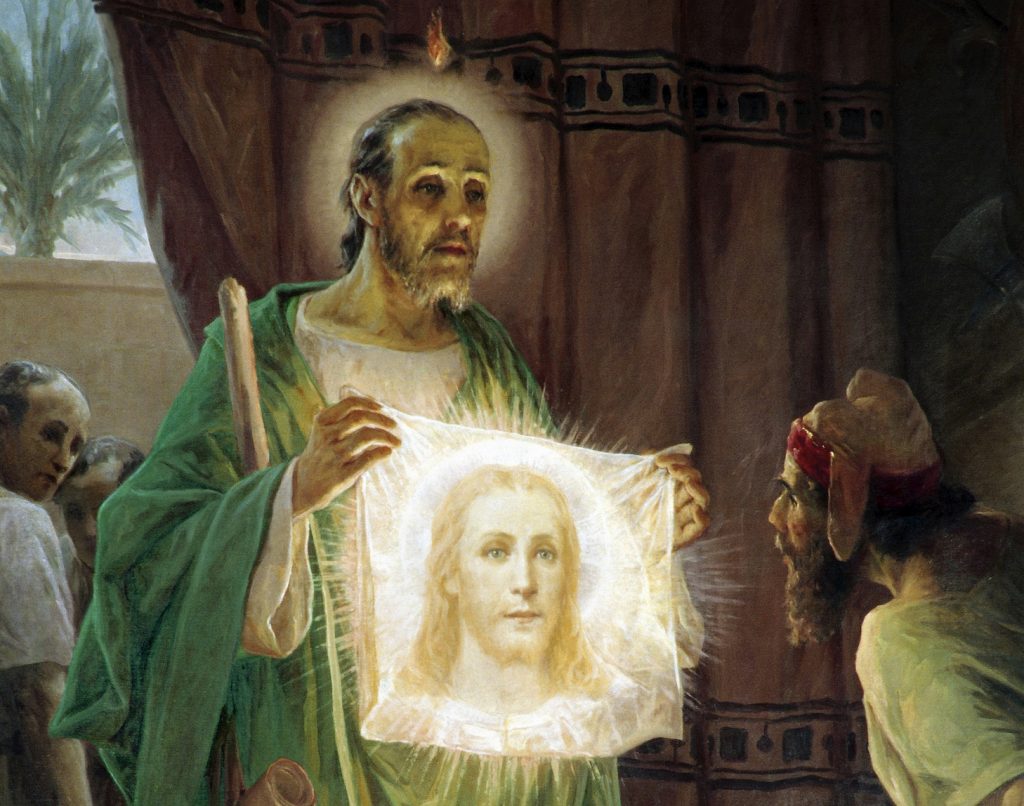 According to tradition, Saint Jude carried the Mandylion — a cloth bearing the image of Christ’s face imprinted by Jesus Himself — to King Agbar of Edessa. The image cured Abgar of leprosy and converted Edessa to the Catholic faith.

The two exchanged their addresses at the end of their conversation. She was surprised later to receive from the sick person eight vials of oil from the Holy Face of Tours, in order to distribute them according to the needs she might see. Her choice fell on me.

I don’t know why I didn’t make use of it immediately. But on May 4, Thursday, exactly one month after the first symptom of this illness, a very uncomfortable pain appeared and led me to use the oil, anointing my face with it, just before the midday Mass.

Instead of the relief I had expected, I experienced, on the contrary, an intense pain on my face. I saw this as a sign that Jesus Christ wanted me to participate in the mystery of his Passion, so I began to pray for certain intentions that had been entrusted to me. is lasted only a few minutes, after which the pain disappeared completely.

The next morning, on May 9, I underwent a medical examination at the Salpêtrière Hospital, which had been previously scheduled. The purpose of the appointment was to verify, by means of an electric current, the state of the facial nerve.

The doctor told me, to my great surprise, that the nerve was reacting perfectly to the electrical stimulation. It had regained its full integrity.

The following Thursday I had a conversation with a professor of medicine, who told me, “It wasn’t human intervention that did this.”

I continued with the daily facial massage therapy, as directed by the speech therapist at the Salpêtrière Hospital, whom I was to visit again on June 12. During the appointment she noted, also with great surprise, that my face had regained its mobility perfectly.

I made a final appointment for September 18, when she ascertained that I had been left without any of the ill effects that sometimes follow this condition afer its cure.