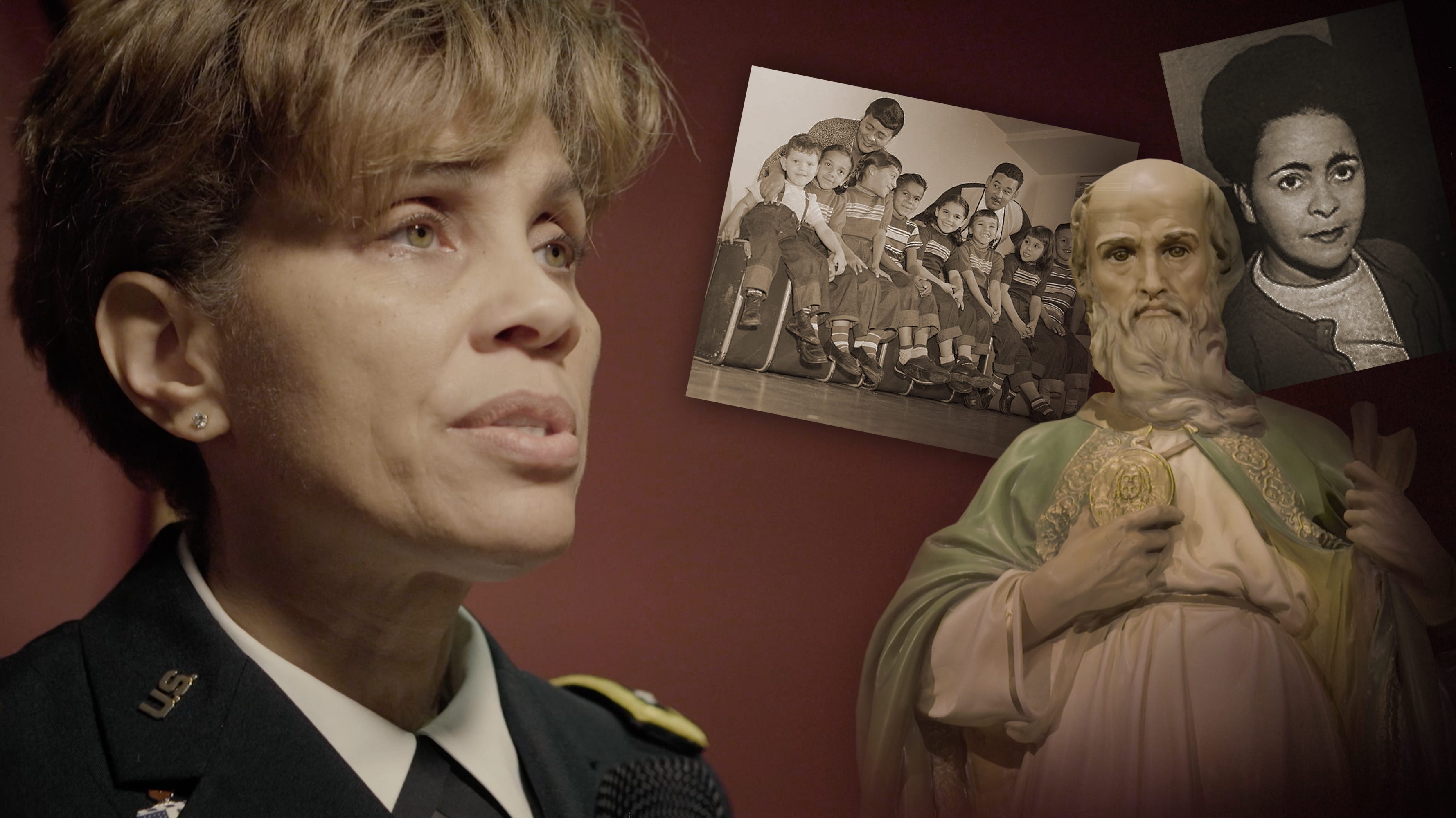 Earlier this year, Saint Dominic’s Church, home of the Rosary Shrine of Saint Jude, was proud to host our parishioner, US Army Surgeon General Nadja West, as she told the story of her remarkable upbringing. General West testifies to the power of Our Lady of the Rosary and Saint Jude to change a person’s life in a way that touches thousands around her. We are delighted to share General West’s story with you here:

I’m a fellow parishioner here and I share fellowship with you, and I’m really not sure that anything I could possibly say could be as interesting or as inspiring as the things that we hear each week from our wonderful priests. From an order, who, by definition, are expert preachers. So that’s going to be a hard act to follow but I’ll definitely give it a try.

I’d really like to express my deep appreciation for the Dominican Friars, who were formed, in part, as a response against a heresy which denied the dignity of our humanity. And who also fostered devotion to our Blessed Mother, who is, I have no doubt, directly responsible for me being here today. (We all know the biology and such of how human beings get here, but when you hear the story that I will tell you here this evening I think you’ll understand why I say this.)

With this in mind I would like to highlight the life of one woman whose story is not very well known. Hers is truly a story of faith, resilience, and perseverance that I think you might find interesting, because she truly embodies our values and beliefs, our devotion to Our Lady, spirituality, and service to others. And she was really a big fan of Saint Jude as well.

Her name was Mabel and she was born in the early 1900s in Hot Springs Arkansas, the granddaughter of slaves and the second oldest of child of a family headed by her father, who with his wife raised seven children on the money he made from tips as a bellman, carrying luggage for guests at the Arlington Hotel at Hot Springs Resort (still in operation today by the way.)

Her father died of a heart attack at a young age, which left her mother to raise seven children by herself. And as we remember from our history, growing up in the 1900s during the depression era was very challenging to say the least.

Early in her childhood Mabel became very ill with high fevers and stomach pains and the family doctor who came to the home diagnosed her with peritonitis, which is basically inflammation of the abdominal cavity, and was later found out to be due to a ruptured appendix. As you know, acute appendicitis is a surgical emergency, and the doctor told Pearl, Mabel’s mother, that she would die without surgery. Well the family didn’t have money for surgery and there were very few alternatives at that time in the segregated south. And so the doctor, though he seemed to truly care, told the family there was really nothing he could do, but he would try to make Mabel comfortable until she died. Well, Pearl did not want to hear that. She didn’t want to hear that she would be losing her daughter and was determined that Mabel would live. And Pearl’s motto was that with God anything was possible, and she transferred that determination and reliance on God to her daughter and it remained with her all throughout her life.

Mabel did survive although she did have complications from the untreated ruptured appendix. She later told her mother about seeing a beautiful lady who kept smiling at her and who was holding a kind of necklace in her hand while she was unconscious. So remember that point for later.

As Mabel grew up, that determination and drive stayed with her, and though the odds of succeeding were small, she knew she would overcome those odds and make a difference. She was always taught that education was key, so she worked many odd jobs, taking small steps to reach her goal. She moved to Pittsburgh Pennsylvania to follow an opportunity to go to beauty school, and recalled getting up at three o’clock in the morning to get to one of her jobs as a window washer so she could finish before her classes started. Coming from the south, she had not encountered weather as cold as it was in Pittsburgh and she remembers her first experience of having the water in her eyes freeze while cleaning windows one winter morning.

Undaunted, she continued, focusing on her goal and on improving herself so that she could make a difference. She completed beauty school and worked as a hairdresser until she saved enough money to put herself through college. And she eventually graduated from college at Ohio State, where she studied journalism.

She went on to be a writer on the staff of the Baltimore Afro-American newspaper, a publication that was established in 1892, that crusaded for racial equality and economic advancement.

So it is now the 1940s and it is truly her time to make a difference, which she did with a passion. She along with the newspaper’s photographer, William Scott, risked their lives on many occasions to expose injustices and to give a voice to the disenfranchised and had a profound effect on social change.

She took on many issues, often enlisting the assistance of Thurgood Marshall, the former Supreme Court justice who was then a civil rights lawyer who travelled around the country working on many cases, usually for no pay other than a place to stay, since many of the towns that they visited did not have accommodation for blacks during that time.

She helped enlist and secure the support of first lady Eleanor Roosevelt to allow African American WACs as they were called, which is the Women Army Corps, to serve overseas during World War II. They were previously not allowed to represent our nation on foreign soil. She took on the mission of lobbying the War Department, which is now the Department of Defense, to desegregate Arlington Cemetery during World War II. Previously all soldiers of color – including our Native Americans – were buried in a separate section.

Her perseverance paid off when she was successful in ensuring that soldiers who died for their country did not have to bear the indignity of segregation even in death. And so it’s quite fitting that she and her husband – along with one of their sons – now rest in Arlington Cemetery not too far from the eternal flame of the gravesite of President Kennedy.

Did she answer the call to social justice? I think so. But guess what? Her story doesn’t stop here. She has countless other contributions in the civil rights arena but she always felt that she could do more.

After going through some troubling times, her brother, who was actually the pastor of Berean Baptist Church, which is right here in Washington DC, told her one day, and very oddly, that she should talk to a priest. And later he said he didn’t know what seized him to tell her that. Now again – here is a pastor – they grew up as a Baptist family, but he said, “talk to a priest.” And she did, at Holy Redeemer Church, which is also here in Washington DC, and that led to her conversion to Catholicism.

That’s where she also learned, after all those years, what that kind of a necklace was that she saw as a dying child. She saw what it really was, and that started her lifelong devotion to Our Lady of the Rosary, and her zeal to do more and help others.

And after her marriage to a soldier in 1950 and her first trip out of the country on an overseas assignment, Mabel found that opportunity to do something. While overseas, her husband went on many extended field exercises, and so each time she would go on various tours and visited several holy sites. She visited Lourdes, Our Lady of Częstochowa in Poland; she saw the Infant of Prague in Czechoslovakia at the time – now the Czech Republic; and when she returned to her home overseas she had a chance meeting with some Catholic nuns who invited her to visit one of the local orphanages. That day she knew what she could do to make a difference.

Over the next several years, Mabel and her husband had, with their connections from their journalism days and the assistance of several airlines, arranged for the adoption by families in the United States of over 500 abandoned and orphaned children.

And since the scar tissue from her previous ruptured appendix had affected her ability to have children of her own, Mabel and her husband adopted 12 children of their own, and all went on to persevere and contribute as well. Her sons joined the army and served in Vietnam. One daughter served her country with distinction in the Navy and ended 31 careers on the aircraft carrier USS Roosevelt during Operation Iraqi Freedom. Another daughter is teacher in a Native American village in Alaska and has adopted a son of her own. Time really doesn’t permit me to tell you about the rest.

Though she did not seek publicity or fame, in 1968 Mabel and her husband’s efforts were recognized and they both received the Papal Humanitarian Award from Pope Paul VI.

So for the rest of her life she continued to be an inspiration for all on how one person from humble beginnings could make a difference, change America positively, and influence how Americans are perceived by other nations.

And I think about how different this world would be today if many years ago that determined little girl who refused to die had succumbed to her illness. All of the individual positive changes that she made may not have occurred. Over 500 children would have easily wandered off the face of the earth unknown and not knowing the love of a family. And I would definitely not be standing in front of you today, most certainly would not have had the privilege of being an American soldier like my dad, as I am one of those 12 children who benefited from her and my father’s unbelievable love and their great example of what good and decent human beings can do.

She and my dad gave me a second chance at the wonderful gift of life. They gave me my faith, my devotion to Our Lady, and also to Saint Jude, one of my mom’s favorites and also my confirmation saint.

And I attribute to Saint Jude all the other blessings and things that have come my way since that time.

And so in closing I’d like to ask you to reflect for just one moment on what and where America is today. If you think about, in our relatively short history as a nation, we’ve eclipsed many others who have been in existence for millenia. We’ve done it through the commitment and sacrifice of countless men and women of faith who responded to the challenge to make a difference.

And so today I challenge you all here (you came just for a talk, but I’m going to give you a challenge, if that’s okay). I want you to think how will you make a difference. How will you be women and men for others (I know that’s the Jesuits, but I borrowed it).

So Mabel Grammer’s story really confirms that it really doesn’t matter where you start. And mine as well. It doesn’t matter where you start – it’s how you finish. So how will you cross the finish line? I ask that we all continue to change America for the good so that our nation continues to be the shining example of freedom and hope that it is for the world. God bless our nation, God bless our wonderful parish, and God bless all of you.