The Best Prayer for Men 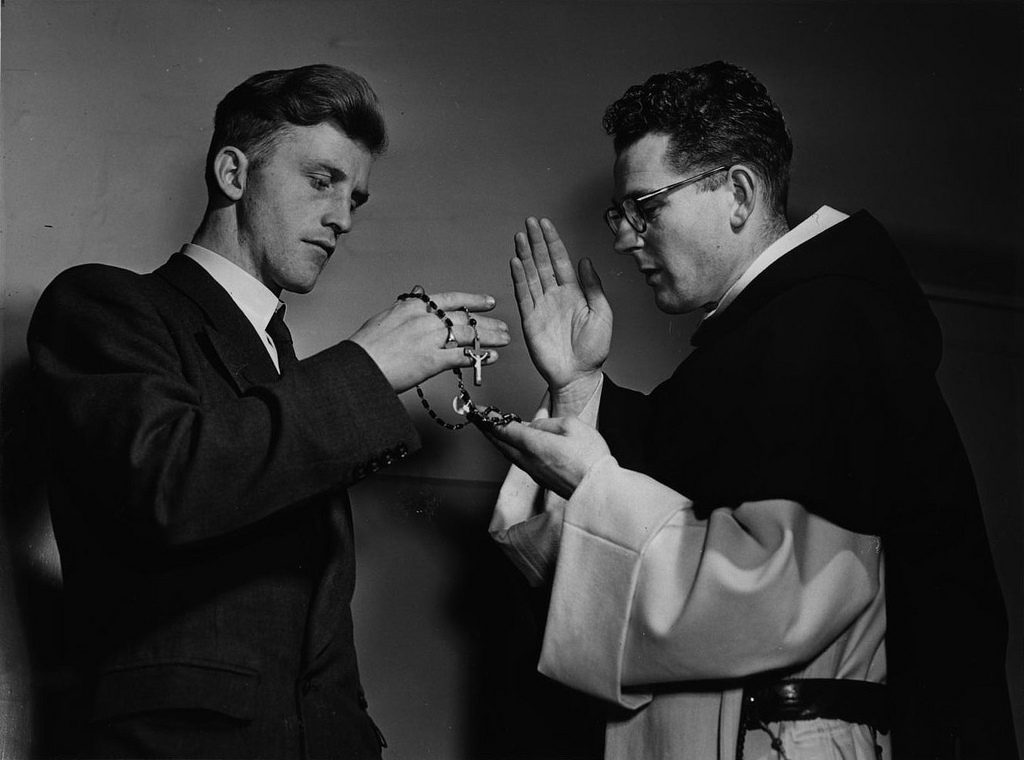 A version of this article appeared in the online journal, Dominicana.

As valued benefactors of the Rosary Shrine of St. Jude, you know the importance of devotion to Our Lady. But it may not seem intuitive for some Catholic men. Growing up, I’d occasionally catch my father as he finished praying the Rosary early on Saturday mornings or notice he’d left his handsome set of beads lying out on a coffee table. I had the blessing of his example. Other men know their fathers have placed a Rosary in their locker at work (try and find a Catholic firefighter who doesn’t have either a Rosary or a saint’s medal) or even just keep one in their pocket, where from time to time they’ll pause and touch the beads. But for those men who haven’t “seen” or “heard,” how do we make sense of the Rosary as a manly devotion?

1. The Rosary is covert. A fierce point of intimidation of being a man of faith in our culture is the fear that we will amount to being hypocrites (and we know how much Jesus loved that…). In the face of our own weakness, we want to be authentic about who we are, what we’re capable of, and what we believe. Rather than broadcasting or projecting a false image of ourselves as mighty saints, men prefer to keep things on the down low. The problem is this principle of authenticity—which is truly noble—can be our undoing. When we’re not grounded in something solid, we’ll drift away. We’re not all called to some kind of grandiose witness, like martyrdom or preaching, but we do need to be faithful. The Rosary offers a structured program for building up the foundation of faith in our souls in secret, so that when the storms come our hearts will be strong enough to be true.

2. The Rosary arms us for spiritual warfare. The fact of the matter is that spiritual life is war. St. Paul puts it this way, “For we are not contending against flesh and blood, but against the principalities, against the powers, against the world rulers of this present darkness, against the spiritual hosts of wickedness in the heavenly places” (Eph. 6:12). To contend in the battle, we must put on the armor of Light (Rom. 13:12)! Dominican friars wear the Rosary on the left side, the side which bore the sword for knights of old. In the battle of the spiritual life, prayer is the only weapon, and it must be used. Frequently. Unceasingly. Devotion to the Rosary reclaimed the life of the 19th-century Italian lawyer Bartolo Longo (who had become entrapped in the world of the occult and often dreamt of taking his own life), and without a doubt, devotion to the Rosary will help us overcome the evils which plague us. The temptations and cycles of sin of the 21st century do not own us, for the Rosary narrates the greatest conquest of all time: the victory of life and light over sin and death.

3. The Rosary sanctifies our contemplative side. Like fixing things around the house, solving crises at work or otherwise designing and building, men love to muse over problems. I’ve heard it said before that during time set aside for prayer people should clear their minds, so that they can be totally focused on God. That seems unnatural to me. It’s been my experience that God wants us to set before Him the mess and mud of our lives, not hide it from Him. This is the very glory of Christianity—the Incarnational principle—that God would condescend to our world and sanctify it, lift it up to Him. The mysteries of the Rosary lead us to think and reflect on the stuff of our lives, while simultaneously giving us an opportunity to hand our struggles over to the Lord. When we reflect on the mysteries of the Rosary, we join our lives to Christ’s. By praying the Rosary, God pierces the hardened shell of our hearts and opens up a place for Him. He will speak to us, to the problems of our own lives, through the Rosary.

4. Jesus says so. Ever since second-grade religion class, Jesus is usually the right answer. Without getting all theological, we can simply say: men should pray the Rosary because He told us to. From the Cross Jesus tells St. John, “Behold your Mother!” (Jn. 19:27). That command to “behold” is not St. John’s alone—it’s ours, too. To behold, to take in, to bask in, to be attentive to, to delight in: this is the command. Through Mary’s intercession at the Cross and in the Rosary, Jesus arranges that the treasury of graces associated with His Immaculate Mother may be opened to us and poured out on us. But we’re left to seek her, to behold her.

Please consider making a donation the Rosary Shrine of Saint Jude, so we can continue our mission of preaching & spreading devotion to the Most Holy Rosary.