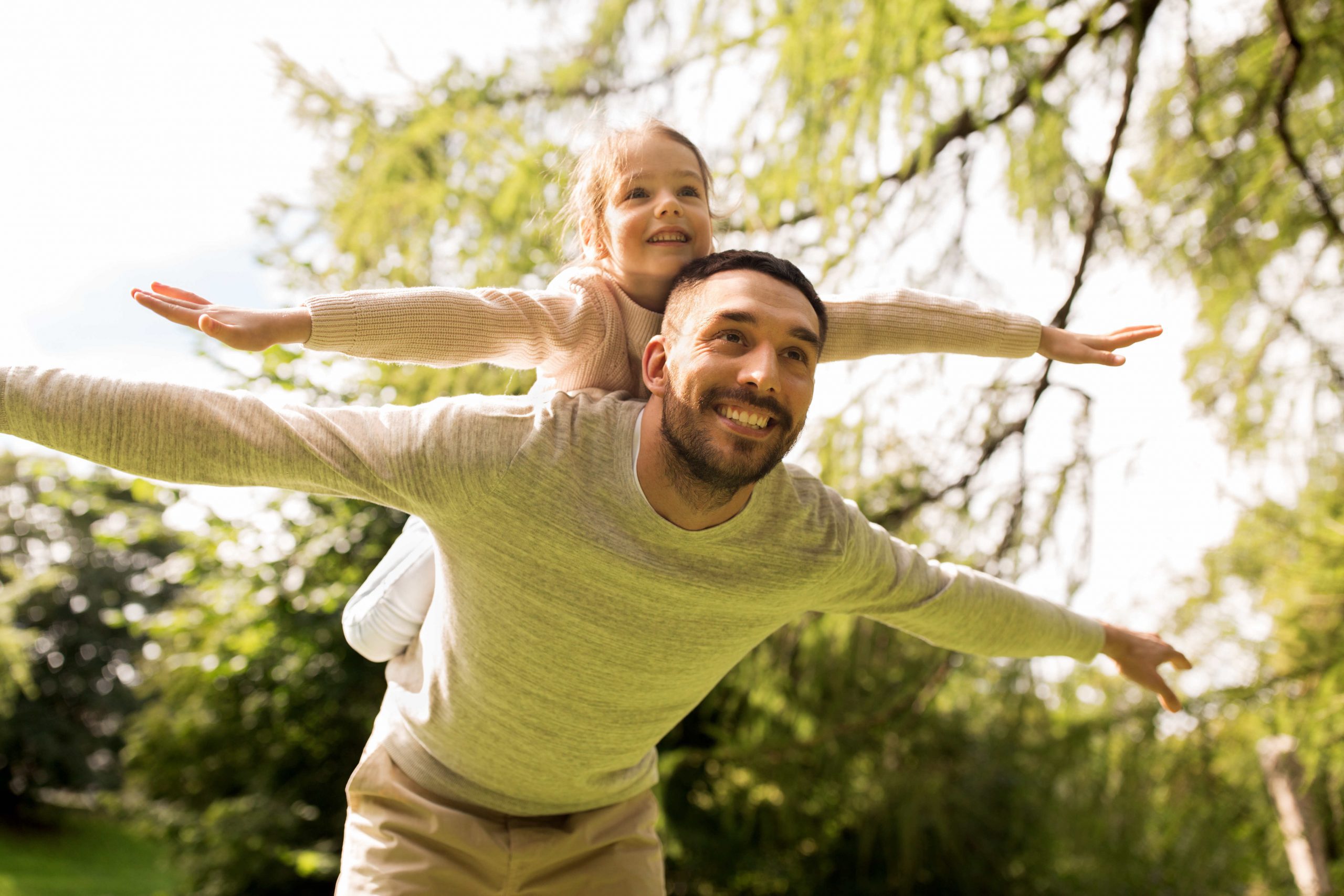 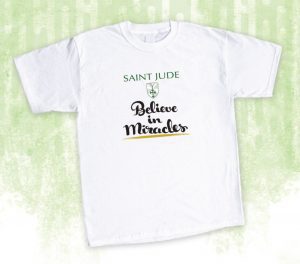 On May 16, my sister was found unresponsive and taken to the emergency room and then the intensive care unit. Two days later, I received a sweet T-shirt from the Rosary Shrine of Saint Jude that says “Believe in Miracles.” I wore it to the hospital today, after resigning my sister to God’s will. I just got the news that my sister woke up, spoke, and recognized her family! Many unbelievers in my family now have a true miracle to contemplate.
—Patty

Yes, there is a God. I do believe in miracles because I’ve seen one first hand. My son Steve was framing a house. They had just cut a hole in the attic area. He turned when someone called and fell through the hole. He fell some 15 feet and landed on his head. At the hospital, the doctors had to take a good part of his skull out. It was touch and go. I gave him my Saint Christopher medal and the priest gave him Last Rites. He looked really bad, but a er a lot of tears and a whole lot of prayers, he is still with us today. He has a disability, but he is still doing okay. I have to believe that God and the saints were with him.
—Roy

I’ve been through countless struggles in my life. Saint Jude has been there for me every single time. When there was no one to help me, no one I could turn to, Saint Jude came through. Always. He’s always saved me: my marriage, my children, and my own life when I was going to take it. If there’s anyone out there who doesn’t believe, please find a saint… any saint; but mine is Saint Jude!
-Anonymous

I prayed to St. Jude for my son to get a job. He received an offer yesterday! Thank you, Saint Jude for answered prayers.
-Kathy

My daughter and her husband had separated and I prayed for them to find their way back to each other. They have three children and with the help of Saint Jude they are back together and have announced they are expecting again.
-Joann

On the last day of my Novena to Saint Jude, my son came home to visit us after four and half years. He calls and visits regularly now.
-Jo Ann 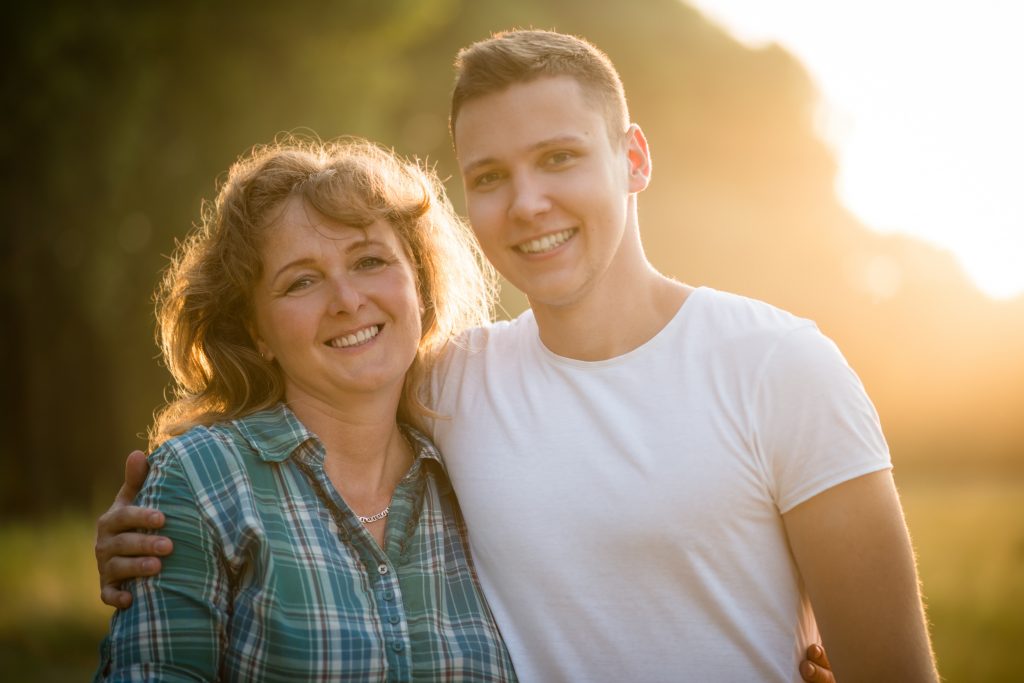 Saint Jude gave life to my mother when she was in the hospital and had been placed on a ventilator. She wasn’t supposed to make it, but I prayed to Saint Jude during the night, and she pulled through. A few days later she was released from the hospital. She later told me she had a dream and had seen Saint Jude outside her farm house. I believe with all my heart that Saint Jude came to her aid. I will be forever grateful to Saint Jude!
-Lois

My husband was on a ventilator for 28 days with Covid. I prayed three Novenas to help wean him o the ventilator, for him not to die, and for removing his tracheostomy tube. Each Novena was answered, and I’m starting another for his mental clarity and physical therapy. Thank you, Saint Jude, for answering my prayers.
-Lisa

My wife was sick with Covid and in the intensive care unit for 28 days. The doctor asked me to sign a DNR. I said the Saint Jude prayer every day, sometimes three times a day. It worked. She is on the mend. Thank you, Saint Jude.
-John

When I started my senior year of Catholic high school we had daily Mass. My mother gave me a Marion Missal which had English and Latin Mass prayers on each page. Someone got away with my Missal, and I was wondering how I was going to tell my mom that it was missing. ere was a drawer in the Business Office for lost and found items. I faithfully checked it every other day, but to no avail. I started daily prayers to Saint Jude asking him to help me find my Missal. My prayers were answered during the last week of school when I checked that drawer one more time before graduation! I hope that the person who had my missal found it useful. Saint Jude is still my special saint 61 years later.
-Leona

46 years ago, depressed and saddened by a miscarriage after years of trying to conceive, my husband found a Novena to the Infant of Prague in a church pew. We prayed it, and at the end, during a very heavy snow storm, we found a yellow diaper pin on our doorstep. Nine months later, our first of six children was born.
-Mary

Back in 1963 Saint Martin de Porres was a very popular saint, and I was pregnant with my second child. I was in my fourth month of pregnancy when I lost my father, whom I was very close to. I felt like my world had caved in, having never experienced the death of someone so close to me. I was in perpetual sadness and tears.

By the time I reached my sixth month into the pregnancy, the child was not moving at all, and the doctor didn’t sense a heartbeat. He gave me just a few days for some reaction, and if by then there was still no movement or heartbeat, he would have to remove the fetus immediately, as that would indicate that it was no longer alive.

You can just imagine how I felt. I clung to Saint Martin de Porres day and night, praying to him with such intensity and for a miracle that my child would be saved. Well, it happened.

One evening I was at the dinner table and all of a sudden I felt my baby kick me with such force that I actually saw him move in my belly. I cried out and realized this was the miracle I had been praying for. Saint Martin answered my prayers, and my son’s middle name is Martin.
-Celia

I have turned to Saint Jude many times in my life and he has never failed me. My youngest son is named Thaddeus Jude to honor this great saint. I would have died along with my son if not for Saint Jude and his intercession to God.

My latest “thank you” to Saint Jude is for another son who sacrificed his life to prevent the woman whom he got pregnant from having an abortion. Now he has graduated law school, passed the bar, and found a job—all the while being a single dad. Every step of the way, Saint Jude was helping him save his daughter and take care of her. Thank you, Saint Jude!
-Mary 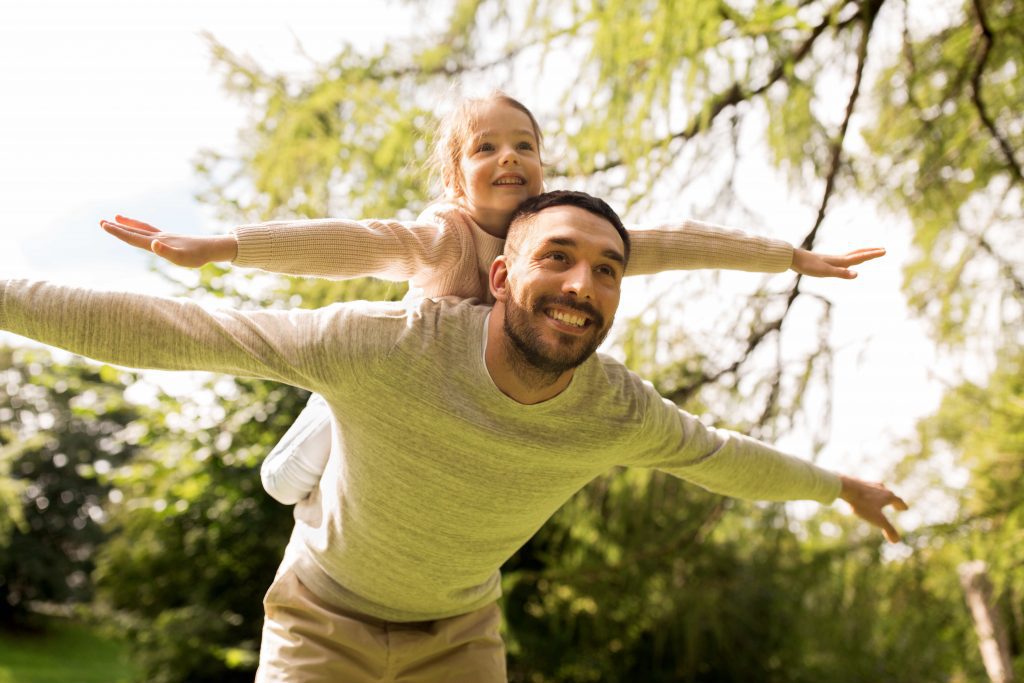 My son is in the Navy and had to pass two tests that would determine the rest of his career. With the help of Saint Jude he passed both tests! ank you, Saint Jude, for your love and help!
-Kathy

I prayed to Saint Jude for my wife’s rheumatoid arthritis. My prayers were My daughter was placed on administrative leave when she was wrongly accused of hurting one of the patients at the medical facility where she works. Although she was investigated and found innocent of any fault or wrongdoing, the managers still kept her on administrative leave. She was getting paid only part of her salary and she had a family to support.

My daughter is not a Catholic, though I am. When she came to visit, she was looking for another job. She had tried to get her job at the medical facility back, but to no avail. I told her about Saint Jude and said I would say prayers to him that she would be employed again.

I began my prayers on Monday, and on the very next day Saint Jude got her job at the medical facility restored to her with overtime. My daughter was so happy and amazed at how prompt and caring Saint Jude is!
-Gloria

My brother was in a terrible work accident. He was severely burnt on both legs and 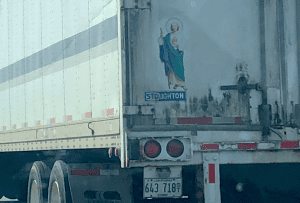 hands. I was his caretaker while I was home from college over the summer. I helped with dressing his wounds, etc. He and my parents were getting into arguments because everyone was tense and stressed out, and I had to leave for a nursing study abroad trip.

I felt so bad leaving my brother in that state! I prayed hard to Saint Jude for my brother to be healed in mind, body, and soul. On the day I left, I begged Saint Jude to help him. When I was driving away from my parents house, I saw this on the semi truck in front of me [see photo.] I have never seen anything like this before that or after. It was like Saint Jude was assuring me that he was listening and helping.
-Mary